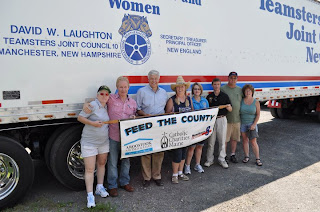 Teamsters in Maine have done their part again this year to help feed the hungry, collecting a record 30,000 pounds of food and $1,600 in monetary donations.

The annual food drive collections were picked up by the Teamsters Joint Council 10 tractor trailer. The truck traveled the length of Maine last week, stopping to fill up on non-perishable food donations collected by members of Teamsters Local 340.

Starting off in Kittery, the truck headed north to Presque Isle to participate in the Maine Potato Blossom Parade.

Did we mention potatoes are a big deal in Maine?

The Teamsters Local 340 Women’s Committee spearheads the food drive, which benefits the “Feed the County” program by Catholic Charities Maine in Caribou. Catholic Charities supplies food to 24 pantries and maintains their own food bank.


During these difficult times, Maine Teamsters, like their brothers and sisters all across the country, unselfishly step up to assist those less fortunate. This year’s successful food drive is another great example of that unselfishness.

“We are all so happy with the results and thank everyone who donated or helped to make this happen,” said Traci Place, business agent with Local 340.