ALEC on the attack in AZ 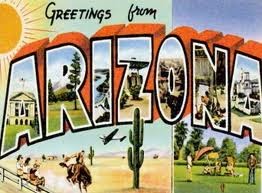 ALEC strikes again. The American Legislative Exchange Council has reached its tentacles deep into the pockets of Arizona’s taxpayers. State politicians are taking part in this insidious power grab. A commission set up by Arizona Gov. Jan Brewer is recommending ways over the long term to stuff corporate pockets and screw workers deliver government services at a lower cost.

The panel has recommended making changes to state employee pensions, making it easier to fire public employees, changing how the state funds schools, privatizing the lottery and privatizing prisons.

State Gaming Director Mark Brnovich was chosen by Brewer to head the panel, which consists of state agency directors, elected officials and business interests. Mark Brnovich comes from the ALEC-connected Goldwater Institute. He is also a former senior director of state customer relations for Corrections Corporation of America (CCA), a prison company that is seeking to benefit from privatization legislation across the country, including the state of Florida, where in May, Skelator Gov. Rick Scott and the state legislature signed off on privatizing prisons in 18 counties.

The Arizona commission also includes as its member Leonard Gilroy, an activist for the Koch brothers-funded Reason Foundation.

It doesn’t get more incestuous than this. Or more anti-middle class.

Arizona’s East Valley Tribune reports one of the commission’s recommendations is to eliminate protections for about 80 percent of the 33,000 state workers, which includes hiring, probationary periods, discipline and firing. "Pension reform" would scrap the defined benefit system in lieu of a defined contribution plan.

This week, four anti-worker bills became law in Arizona, as The Arizona Republic reports:
In the past few years, commissions on “efficient government” have been introduced in Virginia, Maryland, Arizona, Kansas Oregon, Illinois and South Carolina.

Brace yourselves, boys and girls. We're going to see a lot more of this.
Posted by Teamster Power at 10:56 AM