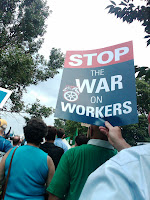 Here's a video of today's rally on Capitol Hill. The heat was sweltering, but that didn't deter hundreds of people from rallying to raise the debt ceiling. Teamsters brought our "Stop the War on Workers" signs, but we also saw lots of green from AFSCME, red from CWA, blue from AFGE and pink from feminists. We saw signs from USAction.org, Gray Panthers, Rebuild the Dream and one big-ass "Solidarity Wisconsin" sign.

The video starts with the announcement of the arrests and finishes with the crowd singing "This Land Is Your Land." 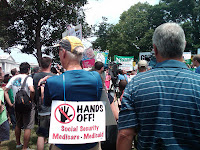 
I thought if I sacrificed for my country, my country would help me. Unfortunately that's not the case. I'm still an unemployed Army Reservist with three mouths to feed. ... I had to leave my small children and husband last year .... to go overseas to fight for our country. I sacrificed my time with my family because I believe the American Dream is worth fighting for. If you work hard and play by the rules you can live with dignity, provide for your family and give your kids a better life.

Lost in the blather over the debt ceiling debate has been the partial shutdown of the Federal Aviation Administration. Because extremist politicians want to weaken unions in order to please certain airline CEOs, 4,000 FAA workers have been furloughed and as many as 90,000 construction jobs are threatened as airport projects come to a halt. Ralph Randall, a furloughed FAA worker, gave a fiery speech at the rally: