They gave a Tea Party and only the DC press came 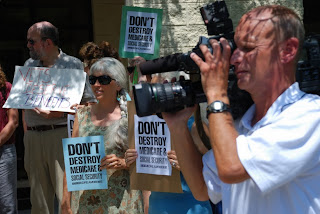 It happened on Tuesday. In Washington, DC, Sen. Jim De-Mint, R-Crazytown, spoke to a Tea Party rally on Capitol Hill at which a handful of people showed up.

From the photos, it looks as if the press outnumbered the Tea Party.

Exhibit A is this photo of a row of news reporters -- and no one else -- in front of DeMint.

We won't steal the photo from Slate but we'll link to it. Ya gotta see it here.

Then check out the photo of the exact same event moved by the Associated Press. You can see it here (again, we won't steal copyrighted material). It shows DeMint in front of maybe four people. The caption?

The AP moved a national story about that tiny protest. A long one. Here's an excerpt:


As senior lawmakers searched for a deal that can pass both the Senate and House before Aug. 2 — when the government faces running out of money to pay all its bills — a few dozen tea party members rallied in the sunshine a couple of hundred yards from the Capitol.

But did the Associated Press move a national story about the thousands of people who protested at the offices of their representatives all across America yesterday? Here's the AP's national story on groups that lobby on the issue;


Liberals are also working the battle, trying to rally Democrats to oppose Boehner's effort and to protect Social Security, Medicare and Medicaid from budget cuts.

Unions have bought ads in Capitol Hill newspapers and visited lawmakers, arguing that working families would be hurt while the rich and corporations would be protected.

Nope, no mention of the thousands of people who rallied around the country on Tuesday against cuts to Social Security, Medicare and Medicaid. (Oh, and P.S., you don't have to be liberal to want to save those programs.)  To its credit, the AP ran a local story about a protest in Tennessee:


About 30 people braved hot weather to attend a protest in front of Republican U.S. Rep. Marsha Blackburn’s office at Second and Main in downtown Franklin. The protest was organized by the Williamson County Democratic Party and timed to correspond with similar events at congressional offices around the state and the country.

And there was plenty of local coverage of individual protests around the country.

But the national news media is doing the country a disservice by ignoring the anger of so many Americans because their government is toying with cuts to essential program for working people and failing to deal with the jobs crisis.
Posted by Teamster Power at 10:03 AM