WA longshoremen: ‘We’re all going to jail as a union’ 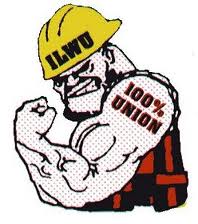 West Coast longshoremen may be in the fight of their lives. Their foe is a grain terminal that's partly owned by a South Korean shipping company. The grain terminal owner wants to bust the union, ILWU Local 21. What's more disturbing is that Congress is now considering a trade deal with South Korea that would further embolden South Korean companies to break our laws.

According to Public Citizen, the proposed South Korean trade deal,


...includes extraordinary foreign investor rights and their private “investor-state” enforcement – in which a foreign corporation is empowered to directly challenge U.S. laws as trade pact violations before foreign tribunals to demand compensation.

But back to the longshoremen.

On Friday, their protest shut down the grain terminal. One person was arrested.
You'll recall that a week ago Thursday the longshoremen turned back a BNSF grain train at the Port of Longview in the third major protest that week. The previous Monday, 100 union members were arrested for tearing down a fence.

The target of the longshoremen's ire is EGT, which is owned by three other companies: St. Louis-based Bunge North America, Japan-based Itochu Corp. and Korean shipper Pan Ocean STX.


EGT would like to be the Walmart of the grain business and force everyone else into their agenda.

Three years ago, port commissioners (backed by the longshoremen) took 6 acres from a locally owned company at the port and leased to EGT Development, which planned to build a $200 million grain elevator. The longshoremen supported the taking of the land by eminent domain because the new grain facility would create 50 jobs.


EGT imported nonunion construction workers from out-of-state to do most of the work. It now wants to operate the facility with nonunion, out-of-state labor.

Members of ILWU are employed at port grain export terminals coastwise under the Northwest Grainhandlers Agreement, which is set to expire later this year. The union believes if EGT is operating without a contract it will reverberate in upcoming negotiations.

EGT sued the port in January in federal court, claiming they’re not bound by the contract to hire union labor.

The local paper says labor leaders on the West Coast are watching the standoff carefully, fearful that a victory by the grain elevator company will embolden grain companies at other ports to challenge the union.

Now EGT is trying to divide and conquer. It just announced it will hire the operating engineers for 25-35 jobs at the facility.


The International Union of Operating Engineers Local 701, based in Gladstone, Ore., agreed to work for General Construction and take the 25 to 35 jobs at the terminal.

Friday morning, union picketers held signs stating "ILWU Jurisdiction" and "701 Scabs" while walking back and forth on port-owned property on East Mill Road outside the EGT gates. A 20-foot-tall, inflatable cartoon rat stood at the tent.

Here's what ILWU Local 21 President Dan Coffman had to say:


We are going to fight for our jobs in our jurisdiction. We have worked this dock for 70 years, and to have a big, rich corporation come in and say, ‘We don’t want you,’ is a problem. We’re all together. We’re all going to jail as a union.

Solidarity.
Posted by Teamster Power at 10:29 AM