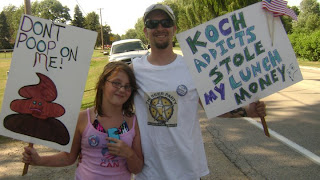 From the photos, it looks as if more than 100 people showed up in the scorching heat for the 4 pm rally against Hopper and Walker, who were sucking up cash from their wealthy pals at the South Hills Country Club.

The rally was organized by AFSCME Local 579. Sadly, no video from our side, thanks to dead batteries. But some guy in a car with "Hopper" signs on it was videotaping the protesters. We wonder what that was all about.

The photos show lots of Jess King for Senate signs. She's a strong candidate to beat randy Randy, given that he lives outside the district with his 26-year-old mistress. And that she almost beat him in 2008. Oh, and that randy Randy supports Walker's radical agenda to destroy Wisconsin's middle class.

In what is now typical fashion, Walker sneaked in the back way to avoid the protesters. You can run, Scotty, but we're coming for you anyway!
Posted by Teamster Power at 1:00 PM