10 arrested inside Capitol as hundreds rally outside

Ten people were arrested inside the Capitol Rotunda around noon today as hundreds rallied to raise the debt ceiling outside on Capitol Hill. Above is a photo of the religious and civil rights leaders preparing to kneel down and pray in an act of civil disobedience. Protesting inside the Rotunda is against the law, apparently.

Bob Edgar, president of Common Cause, was among those arrested. He explained why here.


... in the hope of demonstrating the risks being taken at the expense of America’s poor and working poor...we will ...kneel to pray for Congress to do the right thing: fulfill America’s promise to care for those who cannot care for themselves, to offer a hand up and a fair shake to those willing to work to improve themselves and their communities. I believe that Congress has a moral obligation to stand strong against cuts to our most needy and to assure that corporations and billionaires pay their fair share.

Maine Rep. Chellie Pingree accompanied the faith leaders. Here's what we learn from the Portland Press-Herald:


Pingree met in a room off the House floor with the group of religious and civil rights leaders, who were led by Bob Edgar, the president of the advocacy group Common Cause and a Methodist minister and former Democratic member of Congress from Pennsylvania. Pingree was president of Common Cause from 2003 to 2007, before winning her House seat in 2008. 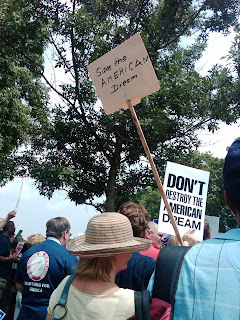 "Thank you for using your voices at such a difficult time," Pingree said. Pingree then walked the group over to the Capitol Rotunda, where the religious leaders sang and then knelt down as they waged their protest, leading to their arrest by Capitol police when they would not leave. Pingree was not involved in the protest, and actually left the Rotunda before the arrest occurred because she was due to speak on the House floor - against the Boehner bill.

Teamster Nation was outside with the crowd when the arrests were announced from the podium. A huge cheer went up, and then everyone sang, "This Land Is Your Land."


In the Rotunda. Popo just made the press with big video cams leave.

Lots of everyday americans visiting the capitol on tours.

Starting hymnals in a circle of the dome room. Crowd goes silent.

We shall overcome. We shall not be moved.

Officer, what warning are they on? "We won't talk about that."

The exit signs in this place are totally wrong.

Went to the capital police headquarters and the officers were surprised but helpful. Told me to go behind station.

First arrest rolling into the parkinglot back door.

Bainshed from the parking lot, i saw the police take the rabbi. 4 arrested and inside so far.

Number 5 with the twist tie handcuffs gone into police headquarters.

@BobEdgarCC last pulled from van. All 10 protesters arrested and inside jail.

Posted by Teamster Power at 2:24 PM