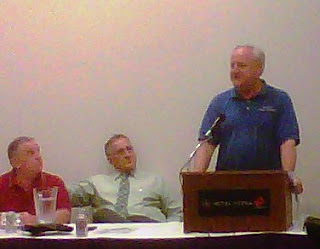 State Sen. Dave Hansen, who just beat back a recall effort (by a mile) spoke to his Teamster brothers and sisters at Joint Council 39 in Wisconsin last night about the upcoming elections.

And there's lots of recall news.

Today One Wisconsin Now reports the Koch-funded Americans for Prosperity


...has just purchased over $150,000 in television ad time for Green Bay, Madison and Milwaukee in what could be a new wave of spending to try and save the six Republican state Senators who are being recalled for their support of Gov. Scott Walker’s reckless attacks on public education, health care, workers’ rights and the middle class. This is in addition to $380,000 Americans for Prosperity previously spent this year to support Walker’s agenda.

And now the social conservatives have entered the fray, trying to muddy the waters by making the election about cultural issues. Reports Greg Sargent at the Washington Post,


In a development that raises the stakes in the Wiconsin recall fight, a number of religious conservative groups — anti-abortion, anti-gay rights, and pro-intelligent design organizations — have quietly joined the fray in Wisconsin, blanketing the state with flyers and TV ads backing GOP recall targets and aggressively attacking their Dem challengers.

The polls are looking good for the good guys (the Teamster-endorsed candidates, that is), thanks to the hard work of hundreds of volunteers. Yesterday, the umbrella group for the recall effort announced

If you want to help out and make sure we recall 'em all, go to the WeAreWisconsin.org website.
Posted by Teamster Power at 2:28 PM