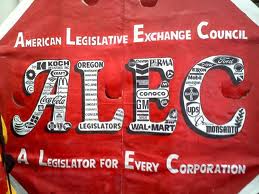 Those charming folks from ALEC have filed 105 bills to lower wages since January 2011, according to a new report by the National Employment Law Project (NELP).

ALEC is the dating service for state lawmakers and corporations. It's backed by a network of greedy billionaires, headed by the Benedict Arnold Koch brothers.

ALEC drafted bills to repeal state minimum wage laws, reduce the minimum wage for youth and tipped workers, weaken overtime protections and forbid living wage ordinances. One hundred five bills were introduced in 31 states, and 67 of those were sponsored or co-sponsored by ALEC members.

The good news: Only 11 passed. The bad news? As NELP puts it,


The persistent introduction of legislation to weaken or repeal wage standards drains the political momentum behind improving wages and workplace standards for low-paid workers by forcing a defensive fight over protecting the standards that already exist. As retail and fast-food workers in New York, Chicago, and cities across the country take collective action to improve wages in the nation’s fastest-growing low-wage industries — and as dozens of legislatures consider new proposals to increase minimum wages this year — ALEC’s wage suppression agenda serves as a significant source of inertia undermining the current push for better wages and workplace standards.

NELP notes the ALEC bills contribute to a climate that encourages attacks on workers, their wages and their pensions. ALEC has also drafted bills to weaken unions through No Rights At Work and making it illegal for employers to honor workers' voluntary request to have their dues deducted from their paychecks.

It isn't as if the employers can't afford to pay decent wages. NELP's press release states:


As wages remain low for workers in retail and food services, many of the largest employers in these sectors remain in strong financial condition: 78 percent of the 50 largest low-wage employers have been profitable every year for the past three years, and 63 percent are earning higher profits now than before the recession.

Greed knows no limits.
Posted by Teamster Power at 3:02 PM