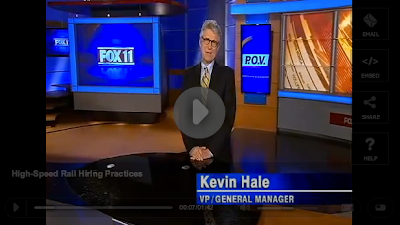 Does Fox ever get tired of trying to destroy America?  Last week, another Fox hack smeared unions as part of an attack on California's high-speed project. (Watch it here.)


What do ex-cons and trade unions in California have in common? They are both getting preferential hiring treatment by the California High Speed Rail Authority.

Well they are being defined as disadvantaged because they are primarily young people, just starting out in their careers, working their way up the union ladder.

Um, does he know how many people in California are out of work? The real unemployment rate, U-6, averaged 19.3 percent last year. (U-6 is defined as official unemployed, forced part-timers and those who dropped out of the labor force.)

Employment among California's young people (ages 16 to 24) was the lowest since the 1950s, according to a report published in December. Annenberg TV News reported:


The study conducted by two children’s advocacy organizations, the Annie E. Casey Foundation and Children Now, found that 868,000 Californians ages 16 to 24 neither work nor attend school. This marks a 35 percent increase since 2000.

That's known as a youth unemployment crisis. Fox's idiot general manager should be praising unions for advocating high-speed rail in the first place. Then he should be thanking unions for giving young people that leg up.

It's hard to believe this guy calls for "fresh ideas" in a line of attack on unions that probably started during the administration of Grover Cleveland.

Let's face it, Fox itself offers preferential treatment for any hack willing to lie in the service of billionaire empowerment. Remember the "union violence" in Michigan that Fox "journalists" reported -- over and over and over -- with an obviously doctored video? Never happened.

Fox is on a crusade against high-speed rail, anyway. That's because Fox's billionaire owner Rupert Murdoch and his reactionary billionaire pals want to protect the oil and gas industry. Trust us, you won't ever hear Fox hacks rail against the hundred or so oil companies that drilled in federal (i.e., taxpayer owned) waters without paying royalties. And remember this: the first thing corporate stooge governors did when elected in 2010 was to pull the plug on high-speed rail projects. (That would be Rick Scott in Florida, John Kasich in Ohio and Job-killer Scott Walker in Wisconsin.)

The Teamsters Rail Conference strongly supports the high-speed rail project in California. The conference represents more than 70,000 rail workers employed as locomotive engineers, trainmen and maintenance of way workers as members of the Brotherhood of Locomotive Engineers and Trainmen (BLET) and Brotherhood of Maintenance of Way Employes Division (BMWED).

And according to a press statement in July, Freddie Simpson, BMWED president, said:


...we have an opportunity to show Californians the skills and hard work our members bring to the rail profession.

Dennis Pierce, president of the Rail Conference and BLET, said California will be a model for other states and cities:


The California high speed rail line will be a beacon of performance on the West Coast and our members look forward to operating the equipment on this state-of-the-art rail line.

And they aren't lying.
Posted by Teamster Power at 3:36 PM