Why does Wisco's economy suck? It's Walker 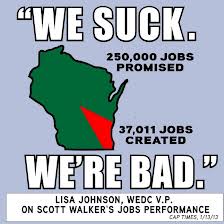 The Milwaukee Journal Sentinel, which endorsed Job-killer Gov. Scott Walker in last year's recall election, offers a clue about why it's so hard to find a decent job in Wisconsin.


Wisconsin ranked 11th among the 50 states in 2010 in private-sector job growth, outperforming the nation as a whole. But it dropped to 38th in 2011, Gov. Scott Walker's first year in office.

mid coast views does follows up on the clue:


The single largest contributor to this dismal performance was the dramatic decline in state and local government income, the direct result of Governor Walker’s austerity economic policies...

Wisconsin’s state and local government employees’ incomes shrank by $529 million dollars, a 2.55% decline. Only Louisiana under the leadership of Tea Party favorite, Governor Booby Jindal, experienced as steep a decline according to the analysis.

And if you're wondering why the U.S. job market sucks so bad for most of us, the Economic Populist has one answer:


Government spending declines were the drag on the economy and sucked out -1.41 percentage points from 4th quarter real gross domestic product growth.

It isn't government that needs to get out of the way. It's the politicians who don't understand -- or care -- the role government plays in creating jobs.
Posted by Teamster Power at 12:53 PM