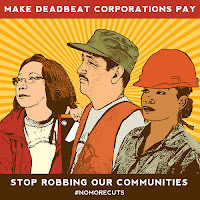 States are now looking to fill budget holes by seizing taxpayers' houses, cars and tax returns. They are not so eager to take back the cash that taxpayers gave to large corporations.


Taxing authorities from Tennessee to New Jersey are reporting shortfalls and lags in collections activities just as cuts from federal funding are being felt.

In Philadelphia, Revenue Commissioner Keith Richardson is “looking at a company that may help us to start taking people’s cars” to recoup some of the half-billion dollars in uncollected taxes, Forbes reports.

Philadelphia isn't quite so churlish with corporate taxpayers. GoodJobsFirst reports Pennsylvania spends hundreds of millions of dollars on corporate welfare.


Pennsylvania has been known to aggressively pursue very large deals, such as the $400 million it provided to a Norwegian company in 1997 for the redevelopment of the Philadelphia Naval Shipyard ... To land a Westinghouse Electric nuclear engineering facility in 2006, the state even enacted a completely new subsidy program.

GoodJobsFirst noted corporations that get giant tax breaks from Pennsylvania aren't accountable for creating jobs. And often they don't.

Forbes reports Delaware is considering a law that would let school districts and counties seize a person's income tax refund to pay for unpaid property taxes. Meanwhile, click here to see the 667 corporate subsidies Delaware handed out since 2000 from GoodJobsFirst's subsidy tracker. They include 1.4 million to Summit Aviation, $16.5 million to Bloom Energy, $1.5 million to Pioneer Hi-Bred International.

A North Carolina County is going even further, reports Forbes.


In Jackson County ... if you don’t pay your taxes, you could lose your house. County tax collectors are using the threat of foreclosure to collect outstanding taxes, a tactic the county hadn’t used since the early 1980s. While effective – the county has collected about $1.2 million in payments from 85 individual tax delinquents – that level of aggressive collections is considered so contrary to public policy that even the Internal Revenue Service has been discouraged from the behavior...

And yet the North Carolina AFL-CIO tells us that the Legislature last year rammed through a business tax loophole amounting to $336 million in revenue lost to the state every year.


...the Secretary of State’s Office now holds more than $66.2 million of such property. Last year, the state stepped up efforts to return those properties to those willing to pay by auctioning off the properties. The state is now accepting bids, a win-win for the state: the state is paid for the properties and they get them back onto the tax rolls.

By now you won't be surprised to know that every year Mississippi spends $416 million on corporate incentive programs, or 9 cents out of every dollar, according to the New York Times. The Times estimates that every Mississippian pays $140 a year on corporate subsidies.

Or if they can't pay, the Mississippi takes their house.
Posted by Teamster Power at 9:45 AM