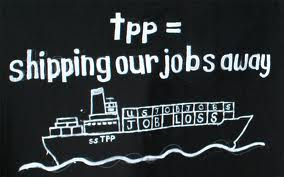 The New Zealand Herald reports on concerns that Japan may hold up the TPP.

The TPP (Trans-Atlantic Partnership) is the NAFTA-on-steroids trade deal that's currently being negotiated. Japan last week became the 12th country to join the talks, along with the U.S. and other Pacific Rim nations.

If the TPP is approved, American dairy farmers, workers and consumers may be harmed. New Zealand's powerful dairy industry may well dump milk, cheese and butter onto the U.S. market.

Japanese farmers may fear the same outcome and hold up the deal. According to the New Zealand Herald, they have good reason:

"Japan is a significant dairy market and its entry into the TPP provides an opportunity for New Zealand to negotiate improved access for its dairy products," said DCANZ chairman Malcolm Bailey.

However, Mr Bailey hoped Japan's entry "won't delay the conclusion of negotiations beyond the October 2013 timeline."

Teamsters, who represent 30,000 dairy workers, are working with dairy farmers and processors to alert Congress to the danger of the TPP.

The Citizens Trade Campaign also cautions on the deal. CTC says there are two reasons for the deal, neither of them good:
Read more here.
Posted by Teamster Power at 12:23 PM