US bought $42.6B in cell phones made overseas last year 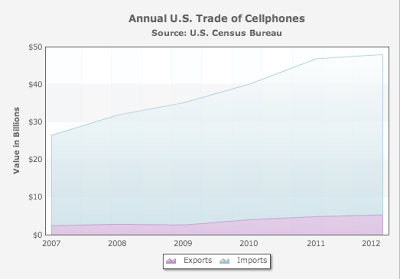 At least the U.S. sold some cell phones to our foreign trade partners. The Census Bureau tells us the U.S. exported $5.3 billion worth of cell phones, which leaves a cell-phone deficit of $37.3 billion.

Here's the sort-of good news: The increase in imports is slowing. And this, according to the Census:

Earlier this year the New York Daily News reported cell phone imports were a big part of the trade gap in November:

The deficit ballooned 16% to $48.7 billion, the highest since April, according to figures from the Commerce Department.

Analysts had been expecting the gap to shrink to $41.3 billion.

An influx of cell phones as retailers stocked up ahead of the key holiday shopping season and of foreign cars helped lift imports nearly 4% to $231.3 billion.