Meet the ex-con doing the Kochs' dirty work in Wisco 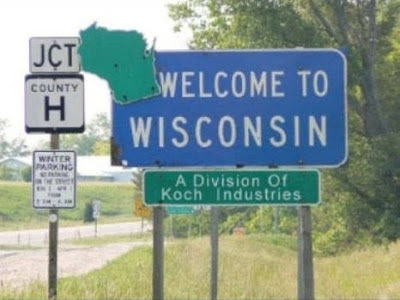 Corrupt former politicians are running a Wisconsin branch of the Benedict Arnold Koch brothers' vast anti-worker network. That branch office, the MacIver Institute, is the Kochs' Wisconsin lobbyist masquerading as a think tank.

The Center for Media and Democracy is shining a light on the odious apparatchiks at the Institute.  Two of them were actually banned from politics. That doesn't stop them from trying to wipe out Wisconsin's middle class from behind the scenes.

The MacIver Institute is supporting Job-killer Gov. Scott Walker's latest effort to sell Wisconsin cheap to every corporate plunderer that can put money in his campaign fund. It's a mining bill that Charles Pierce describes as:


...an environmental catastrophe, a staggering economic giveaway, and a deliberate and obvious offense against the idea of a political commonwealth.

If that sounds like the work of corrupt former politicians out for a buck, well, it is. The Center for Media and Democracy tells us the MacIver Institute's press releases are secretly written by Scott Jensen. Jensen used to be Wisconsin Assembly Speaker. Then he ran into trouble.

Jensen was criminally charged with a felony for spending taxpayer dollars on an illegal campaign machine. Jensen fought the charges for years and finally pleaded guilty to the misdemeanor of using his office for financial gain. The Associated Press reported in 2010,


Jensen agreed to pay $5,000 in forfeitures for the civil violation and another $67,147 to cover prosecutors' expenses. He remains convicted of the misdemeanor ethics charge. The Wisconsin Constitution prohibits anyone convicted of a felony or a misdemeanor involving a violation of public trust from running for office.

MacIver's president, Mark Block, is another corrupt pol. He was charged with violating election law back in the '90s. In 1997, he paid a $15,000 fine and was banned from Wisconsin political activity for three years.

You also won't be surprised to learn MacIver's director of communications is a former staffer at ALEC, the dating service for state lawmakers and corporations backed by the Koch brothers.

The Kochs, by the way, aren't the only ones trying to impoverish Wisconsin's working families. The MacIver Institute receives money from a nasty anti-worker lobbying group masquerading as a charity -- the Lynde and Harry Bradley Foundation in Milwaukee. Harry Bradley, along with the Koch brothers' father, founded the racist John Birch Society.

The MacIver Institute pretends to promote something called a "free market." That's code for public oligarchy. The mining bill is a shining example, write Pierce.


(The Legislature)...gave away public lands to this company while arranging that the political entity known as the state of Wisconsin, and therefore the people they ostensibly represent, would be unable to protect themselves from the damage the company will do.