Europe is limiting CEO pay. Why can't we? 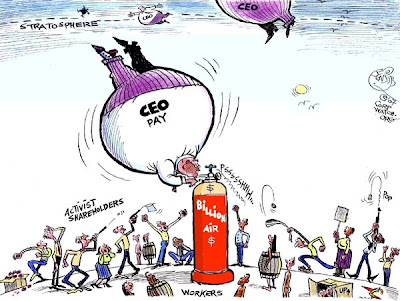 Europeans disgusted with CEO looting of their companies are starting to do something about it. Earlier this month, Swiss voters backed some of the world's toughest controls on executive compensation. Swiss public companies will now have to put their CEO's pay to a shareholder vote.

The Netherlands in 2010 capped executive bonuses and might even tighten the limit to 20 per cent of salary. The United Kingdom is considering reforms to give shareholders a vote on pay, as well as ways to make compensation deals more transparent, reports the Naked Capitalist.

Spain is raising taxes on severance packages. So is France. And in France, according to Too Much,


...the newly elected government of President François Hollande has placed a 450,000 euro cap — about $580,000 — on executive pay at the 52 companies where the French government holds a majority stake.

So why can't we do it in America? The Atlantic reports that the disparity between workers and CEOs is worse in the U.S. than other countries:


American CEOs do earn more than their foreign counterparts, and the disparity between U.S. executive pay and that of average American workers is much greater than the gap between those two groups in most other countries. But the runaway growth in CEO salaries has been so dramatic in recent years -- even in the notoriously worker-friendly E.U. -- that it isn't all that surprising that European policymakers are acting to halt it.

Here's a chart that shows how much worse: 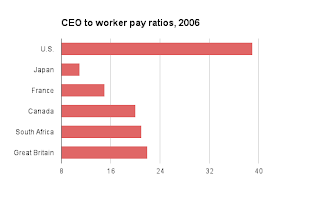 However, American and non-American CEOs are much closer when you take into account certain factors. The Atlantic cites another report that shows


Overall, American chief executives made 26 percent more than their foreign counterparts, according to the 2012 report, if you control for the size of firm, its sales and the type of board and ownership it has.

These days, large companies everywhere are likely to pay their executives rates that would be considered competitive in any country, thanks to the increasing globalization of the workforce and the entry of more and more firms into international markets.

The German newspaper Der Spiegel recently expressed the proper outrage at corporate executives who plunder their companies while workers struggle to get by.


There are many faces of injustice. A member of Volkswagen's executive board recently said that he thought it was unfair that he earned €6 million ($7.8 million) last year...

The market economy thrives on a certain amount of societal inequality. The chance to earn more money and accumulate more wealth animates people to improve their performance. But there is also an invisible limit, and when it is exceeded, the gap between those at the top and those at the bottom becomes big enough to jeopardize social harmony...