This Koch bro has a cause: Counterfeit wine 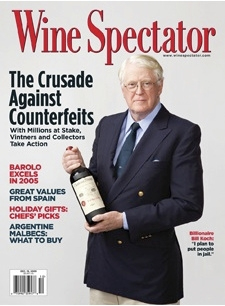 You probably thought all the Koch brothers do is relentlessly attack workers in their never-ending quest to turn America into a feudal serfdom.

But you'd be wrong. Bill Koch has taken up the noble cause of fighting counterfeit wine. Opposing Views reports,

Koch recently took California businessman Eric Greenberg to court alleging that Greenberg sold him $300,000 worth of bogus vintage Bordeaux in 2004 and 2005.

Opening arguments began Wednesday in Manhattan. Koch said the wine, some of which bought through Christie's, touted as being from Thomas Jefferson's estate was inauthentic.

“This case is a simple case about a seller who failed to disclose key information that any buyer would want to know before spending thousands of dollars on a purchase,” Koch's attorney John Hueston said.

Bill Koch is actually the least evil of the brothers. Years ago he blew the whistle on brothers Charles and David for stealing oil from federal and Native American lands. He couldn't stomach the family business, Koch Industries, and left it, telling 60 Minutes it's a criminal enterprise.

Bill Koch also provides plenty of entertainment value. Lately he's been fending off charges that he imprisoned a disgruntled former employee on his Colorado ranch. Then there was his palimony trial. The Village Voice reported,


In 1995—a year after he got married—he tried to evict his mistress, an elegant, blond former model named Catherine de Castelbajac, from a condo he owned at the Four Seasons Hotel in Boston. Castelbajac refused to leave, and filed a palimony suit, claiming Koch had promised to support her financially for the rest of her life. Soon, the embarrassing details of the geeky billionaire's love life emerged in a Boston courtroom. Jurors learned that Bill was seeing three other women aside from Castelbajac (including his first wife, Joan Granlund, and a girlfriend, Marie Beard, with whom he would have a daughter). Koch and Castelbajac exchanged lurid love notes via fax, such as one Castelbajac signed, "Hot Love from Your X-rated Protestant Princess." When jurors finally ordered Castelbajac to leave the apartment, they didn't sympathize with either party. "Neither of them is a prize," mechanic William Tracia Jr. told the Boston Globe.

Still, he exhibits some of his brothers' sociopathic tendencies. He spent $68 million on a sailboat and crew to win the America's Cup, and laundered some of the money through a tax-exempt foundation. He moved to Palm Beach to avoid paying taxes. He's been fighting a Cape Cod wind farm for years because it would spoil his view.

He'd rather spend money on expensive hobbies than on worker safety. The only two coal miners to die in Colorado over the past decade died in a mine owned by his company. He collects art and wine, with a collection of 40,000 bottles worth more than $12 million. The Cape Cod Times has photos of his wine cellar here.

Bill Koch has been described as "like Ahab" in his quest to punish the person who sold him the fake wine. We suspect he's not alone in his zeal to smack down commoners who inconvenience the oligarchs. Premium-wine enthusiast Paul Ryan comes to mind.
Posted by Teamster Power at 9:40 AM