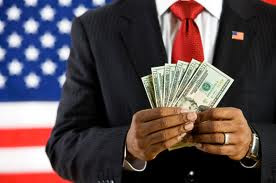 Corporations are secretly spending billions of dollars on politicians to do their union busting. (That's how No Rights At Work got passed in Michigan.) The union pension funds that invest in those corporations should -- at the very least -- know if they're donating money to anti-worker candidates, stink tanks or ALEC, the escort service for corporations and politicians.

Everyone, in fact, should be able to find out where publicly traded corporations are spending their political dollars.

The Securities and Exchange Commission is actually considering a rule that would force corporations to disclose their political spending. The SEC received a record 469,000 comments on the proposal. Only five of those comments were negative. Typically, the SEC gets fewer than 100 comments on its proposed rules.

Its latest proposal is to order firms to justify their political spending to shareholders publicly and in advance, and to explain how such spending is "good for business," Gilbert said. If enacted, that proposal would take effect at once.

Shareholders would then get a chance to weigh in, and possibly even vote, before firms spend their money for politicking by lobbies such as the U.S. Chamber of Commerce or secretive political institutions such as ALEC. The Chamber alone spent $36 million directly - and millions more indirectly - in last year's campaign, she said.

Michael Drucker writes in Independent View that shareholders should have the ability to opt-out of using their money for political campaigns. He explains how the SEC proposal would close a loophole in campaign finance reporting:


Federal law already requires political action committees to disclose corporate donations. By putting in place comprehensive disclosure rules, however, the SEC can plug a major loophole in the law, forcing companies to also reveal what they give to tax-exempt “social welfare” groups and trade associations, including chambers of commerce.

These entities have often been used as vehicles for political spending by way of so-called issue ads, ads that purport to be educational, but are often veiled attempts to support a specific candidate or even party.

In other words, the SEC could, in a single stroke, do what Congress and the courts have been unable or unwilling to do: require publicly traded companies to report all of their political spending.

Mary Jo White is President Obama's choice to lead the SEC, and it's likely her nomination will be approved. Drucker notes that all it will take to enact the rule is a yes vote by White and two of the four commissioners.

Let's hope she decides to do the right thing.
Posted by Teamster Power at 5:29 PM