Mexican vigilantes seize town. And we want to open our border to Mexican trucks? 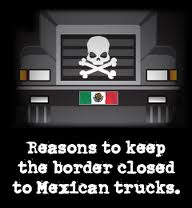 It hardly seems right that the trucking industry's greed would force open U.S. borders to a country as lawless as Mexico.

The Huffington Post reports that earlier this week 1,500 Mexican "self defense" vigilantes took control of Tierra Colorado, which is on the highway between Mexico City and Acapulco.

The vigilantes are masked townspeople taking matters into their own hands because the police are involved with criminals. These are the same police who are supposed to be providing the U.S. government with credible safety information about Mexican truck drivers. You know, so we keep the bad drivers and criminals out of the U.S.

Regardless of the danger posed by violent drug cartels, corrupt police and vigilante squads, the trucking industry will continue to pressure the U.S. government to fling open the border. And there are concerns the latest job-killing trade deal -- the Trans-Pacific Partnership, or TPP, or NAFTA on steroids -- would put pressure on the U.S. government to open the border to all Mexican trucks, not just a handful in a pilot program. TPP talks, which just concluded the 16th round, are expected to wrap up by October.

According to the news report, the vigilantes seized police at a checkpoint on the road and searched residents' homes. One tourist was slightly wounded when he refused to stop at the checkpoint.


Members of the area's self-described "community police" say more than 1,500 members of the force were stopping traffic Wednesday at improvised checkpoints in the town of Tierra Colorado, which sits on the highway connecting Mexico City to Acapulco. They arrested 12 police and the former director of public security in the town after a leader of the state's vigilante movement was slain on Monday...

The vigilantes accuse the ex-security director of participating in the killing of vigilante leader Guadalupe Quinones Carbajal, 28, on behalf of local organized crime groups and dumping his body in a nearby town on Monday. They reported seizing several high-powered rifles from his car, and vigilantes were seen toting a number of sophisticated assault rifles on Wednesday, although it was not clear if all had been taken from the ex-security director's car.

"We have besieged the municipality, because here criminals operate with impunity in broad daylight, in view of municipal authorities. We have detained the director of public security because he is involved with criminals and he knows who killed our commander," said Bruno Placido Valerio, a spokesman for the vigilante group.

Placido said vigilantes had searched a number of homes in the town and seized drugs from some. They turned over the ex-security director and police officers to state prosecutors, who agreed to investigate their alleged ties to organized crime.