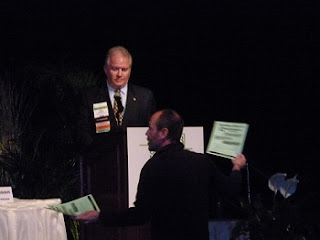 The venue was the annual Residential Recycling Conference in Chicago, sponsored by Republic and Waste & Recycling News. The publisher describes the event as:


...a world-class business conference that gathers municipal recycling managers and executives from privately owned recycling companies concerned with the management and business of residential recycling.

The Teamsters disrupted a session moderated by Dan Jameson, Republic Services’ vice president of Municipal Services and Government Affairs. The session was titled "Truth and Consequences." The Teamsters got in his face and demanded he tell the truth about the landfill.


The Teamsters also distributed leaflets to hundreds of attendees describing Republic’s landfill disaster. The landfill, like many Republic landfills across the United States, is spewing noxious fumes into the air. Also, the landfill is on fire next to a nuclear waste dump site, and there have been explosions in recent weeks. The leaflet quoted one resident, a mother of three who lives near the landfill:

The landfill Republic operates near my home has been on fire for years. The stench is disgusting and the EPA says radioactive nuclear waste at the site is leaching radiation into the air.

I would love to challenge anyone who claims this is a ‘green’ company. Republic doesn’t care about the health, safety and well-being of our city.

Bob Morales said it's important that cities and towns know the truth about Republic when they choose a waste and recycling vendor. He's director of the Teamsters Solid Waste, Recycling and Related Industries Division.


Sanitation workers perform the fourth-most dangerous job in the country, yet Republic Services has been locking out its workers, shorting their paychecks, and trying to cut their retirement. This has led to trash service disruptions in numerous U.S. cities during the past year. I’d recommend cities follow Seattle’s lead, where the city has strong contract language. Seattle’s waste and recycling vendors pay steep fines for service disruptions.