23 laws broken by JPMorgan Chase, your friendly neighborhood Too Big To Fail bank 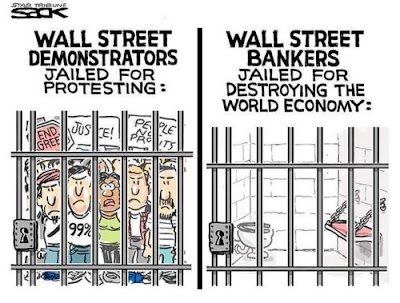 Two former executives at The Lying, Scheming Rogue Bank' JPMorgan Chase were on the hot seat before a Senate subcommittee today. They were asked to explain why they hid massive trading losses from regulators. They didn't give good answers.

The Senate Permanent Subcommittee on Investigations had issued a scathing report yesterday that blamed the bank for recklessly losing $6.2 billion (part of it federally insured) and regulators for looking the other way.

And just days earlier, Joshua Rosner issued another report on JPMorgan Chase's documented systematic fraud and abuse. Blogger David Dayen writes that it looks more like a rap sheet.  Aptly named 'JPMorgan Chase: Out of Control,' the report lists 23 cases, most of which the bank admitted to through financial settlements. They include,
And that doesn't include the shenanigans that led to the $6.2 billion loss in the so-called "London Whale" trade, which was the subject of today's hearing.


The fund used (in part) federally-insured money to create, in essence, a kind of super high-risk hedge fund that gambled on credit derivatives, and ... when it got in trouble, it resorted to fudging its numbers in order to disguise the fact that it was losing money hand over fist.

Chase for years hid the very existence of this operation from banking regulators and lied about the purpose of the fund (saying it was purely a hedging operation when it stopped being a hedge and instead became a wild directional gamble), and it also changed the way it calculated the fund's value once it started to lose hundreds of millions of dollars. Even worse, the bank's own internal auditors signed off on the phoney-baloney accounting of this Synthetic Credit Portfolio (SCP), at one point allowing it to claim $719 million in losses when the real number was closer to $1.2 billion...

It's just unbelievable, what this company has gotten away with.

The primary government regulator of the bank is the Office of the Comptroller of the Currency. Taibbi writes:


The report exposes two huge problems here. One, Chase consistently hid crucial information from the OCC, including the sort of massive increases in risk the OCC was created precisely to monitor. Two, even when the bank didn't hide stuff, the OCC was either too slow or too disinterested to take notice of potential problems.

Let's hope this hearing is not just another congressional puppet show designed to make the public think they're doing something about a serious problem.
Posted by Teamster Power at 5:35 PM