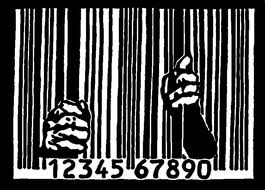 The bill prohibits the department of corrections from transferring custody of prisoners to a correctional facility operated by a private or for-profit entity. There's one exception: when the governor declares by executive order that a corrections emergency exists.

Granite State Progress tells us the debate took place late this morning. Our brothers and sisters at the State Employees Association/SEIU were among the groups that worked on it.

The bill moves to the Senate next week, and we understand it will be harder to pass in the upper chamber.

The bill's highlights include:


I. The management and operation of a correctional facility involves functions that are inherently governmental. The imposition of punishment on errant citizens through incarceration requires the state and local government to exercise their coercive police powers over individuals and is thus distinguishable from privatization in other areas of government.

II. Issues of liability, accountability and cost warrant a prohibition of the ownership, operation, or management of correctional facilities by for-profit private contractors...

3 Applicability. This act shall not apply to any contract entered into prior to the effective date of this act by the commissioner of the department of corrections with a private entity for the custody of prisoners. Upon the expiration of any such contract, the commissioner shall transfer custody of such prisoners to a state or county correctional facility operated by the state of New Hampshire or another state government, or the federal government. This act shall not apply to contracts for goods and services which are ancillary to the custody of inmates such as medical or educational services, or repair and maintenance contracts.

4 Effective Date. This act shall take effect upon its passage.

This will not make ALEC happy.
Posted by Teamster Power at 4:34 PM