10 shocking facts about corporate exploitation of America; it's even worse than we thought (UPDATE) 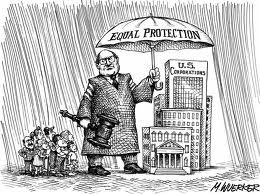 (UPDATES to ADDto 7th graf to CORRECT the correction on corporate ownership.)

Excessive corporate power is causing the standard of living to fall for 90 percent of Americans, according to David Cay Johnston, a Syracuse University law professor.

Johnston recently published a book called 'The Fine Print,' which describes how corporations get rules and regulations written in their favor so they can milk Americans, a penny at a time. A review of the book notes,


No other modern country gives corporations the unfettered power found in America to gouge cus­tomers, shortchange workers, and erect barriers to fair play. A big reason is that so little of the news . . . addresses the private, government-approved mechanisms by which price gouging is employed to redistribute income upward.”

In a recent interview with Alternet's Joshua Holland, Johnston tells us:


What big business -- and that’s those 2,600 companies which own 80 percent of the business assets in America – what those 2,600 companies have figured out, and their leaders have figured out, because people running these firms are very smart people, is that it is easier to mine Congress and the state legislatures for gold than to go out and earn it in the marketplace.

You are being systematically exploited by powerful corporations every day. These companies squeeze their trusting customers for every last cent, risk their retirement funds, and endanger their lives. And they do it all legally. How? It’s all in the fine print.

Johnston shares 10 outrageous facts about how corporations rob American workers and consumers blind. It's even worse than we thought. We originally posted that .43 percent of the corporations in America own 80 percent of all business assets. Johnston called to tell us our math was off, and we corrected the number to an almost incomprehensible .0043 percent. Believe it or not, it's still worse. Johnston contacted us again to say it's a truly unbelievable .00043 percent. Here's the rest:

Posted by Teamster Power at 2:59 PM