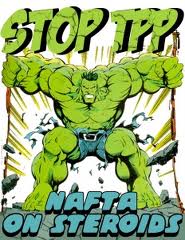 Add automakers to the growing list of U.S. industries opposed to the Trans-Pacific Partnership, the job-killing trade deal expected to wrap up in October.

Alan Mulally, CEO of Ford Motor Co., says he's against Japan entering talks for the TPP, a deal that will strengthen multinational corporations at the expense of individual rights, government sovereignty and the U.S. standard of living.

Mulally spoke to reporters today in Bangkok. Reuters reported he reiterated his opposition to the deal:


Ford has been vocal in opposing Japan's entry into the talks for the Trans-Pacific Partnership (TTP), a U.S.-led Pacific free trade pact, until Tokyo opens its market to more U.S. cars.

"It's the most closed automobile market in the world," Mulally said, highlighting the combination of non-tariff barriers on vehicle imports and distribution.

"They should open up their market, they should restructure their industry, and that's why we're encouraging the people negotiating the free trade agreements that they deal with that."

Japan announced last week it wants to join TPP negotiations. The countries involved in the talks -- including Canada, Australia and Vietnam -- will decide in April whether to let Japan join. New Zealand's trade minister said he's sure they'll find a way to say yes.

Meanwhile, U.S. dairy farmers and workers got even more reason to worry that the TPP will destroy their livelihoods. In a news conference yesterday, New Zealand Prime Minister John Key said he would pull out of a trade deal if it didn't include agriculture. By "agriculture" he meant dairy farms, which enjoy all sorts of government protection.

We're taking Key's comment as a signal that New Zealand's dairy industry intends to dump milk, cheese and butter on the U.S. market as soon as the ink is dry on the TPP.

Sign the petition here to stop this attack on U.S. dairy and automotive jobs.