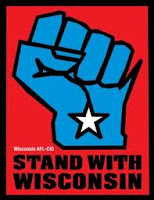 This just in, thanks to Brother Tom Bennett, president of Local 200 in Milwaukee: The Wisconsin state Court of Appeals ruled parts of Job-killer Gov. Scott Walker's union-busting bill are still on hold.

They argue the law violated the state constitution's guarantee of freedom of speech, freedom of association and equal protection under the law. Judge Juan Colas sided with the unions in September, striking down portions of the law.

Walker's law left intact unions for police, firefighters and state troopers, but barred other unions from negotiating over anything but wages, and it limited any negotiated raises to the rate of inflation unless voters approved higher raises in a referendum. Colas' ruling meant local workers could negotiate over a broad array of issues, such as workplace safety, and that there were no limits on how much they could seek in raises.

The Colas ruling also didn't change the fact that public employers can now impose on workers their best and final offer if bargaining fails to produce a deal.

The Court of Appeals could still overturn the lower court's ruling.  It will probably be decided by the Wisconsin Supreme Court.

Posted by Teamster Power at 7:26 PM