Why people get fired for wearing orange shirts: 19.9% unemployment 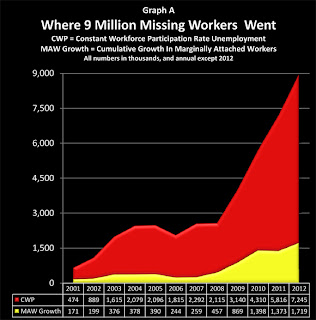 We're not telling you anything you don't know when we say the jobs catastrophe is striking fear into the heart of people who have good jobs. With the true unemployment rate of 19.9 percent in the U.S. (we'll get to that in a bit) employers feel free to fire anyone because they don't like the color of their eyes. Or their shirts.

In South Florida, a law firm fired 14 workers because they all wore orange shirts on the same day. Really. The Sun-Sentinel has the story:

Four workers tell the story this way: For the past few months, some employees have worn orange shirts on pay-day Fridays so they'd look like a group when they went out for happy hour.

This Friday, 14 workers wearing orange shirts were called into a conference room, where an executive said he understood there was a protest involving orange, the employees were wearing orange, and they all were fired.

We doubt the employer would fire 14 workers so capriciously if the unemployment rate were 2 percent, or 4 percent, maybe even 6 percent or 8 percent. But the real unemployment rate is closer to 20 percent. Not too many people are talking about that staggering figure because government statistics paint a cheerier picture than reality suggests.

Daniel R. Amerman, in his essay "Making 9 Million Jobless "Vanish": How The Government Manipulates Unemployment Statistics," explains that the real unemployment rate in the U.S. is 19.9 percent and rising, not 8.3 percent and falling:


What the government's statistical deception is hiding is a catastrophic degree of change in generational employment levels, with the situation being much worse for the young and middle-aged than what is publicly presented. As the fundamental force of aging Boomers increasingly collides with the fundamental force of an employment disaster among younger Americans, the results may change everything that we think we know about economic growth, budget deficits, Social Security and Medicare, as well as all categories of investments.

We'll leave the rest of his analysis to all you nerds here.
Posted by Teamster Power at 9:41 AM