Wake up, America, and read these scary facts 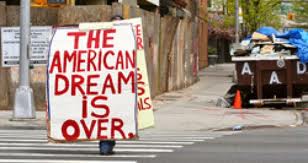 Sometimes we wonder how many Americans understand the extent of the middle class's decline.

Here are a few scary facts that will wake them up:

The End of the American Dream has 30 more of these shockers. Read them all here.
Posted by Teamster Power at 10:58 AM