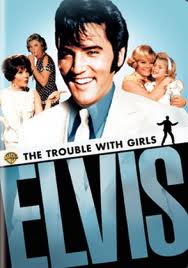 We learn from the tweetosphere that the union-busting pawn shop for the 1 percent Sotheby's will auction off a 1963 Andy Warhol print of Elvis called "Double Elvis." According to Art in America,


Double Elvis [Ferus Type] was first seen at Ferus Gallery the year it was made, and is the first Double Elvis to go on sale since 1995.

It is estimated to sell for as much as $30-50 million and will be exhibited at Sotheby's Los Angeles from this Wednesday, Mar. 21.

We have three comments:
If only Sotheby's were more like Walter Hale and less like Col. Parker. In his film "The Trouble with Girls," Elvis plays Hale, a festival promoter, who falls in love with a fiery union organizer played by Marilyn Mason.

He tells her, "The relations between negotiating parties must be honest." (He also adds "and intimate," but we'll leave that off in the context of Sotheby's.)
Posted by Teamster Power at 1:24 PM