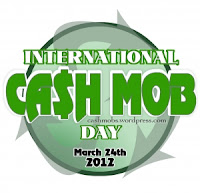 We're not sure how we missed International Cash Mob Day on Saturday, but we're sorry we did.

The Cash Mob people describe themselves this way:


Cash Mobs is a new movement aimed at supporting local businesses and rebuilding communities. A Cash Mob is a Flash Mob, but instead of singing, dancing or rioting, Cash Mobbers join together and each spend $20 at a local business.

We harp about good union jobs supporting local businesses. A great way to make that point might be for a local union to organize a Cash Mob.


:...now a group of online activists is harnessing social media like Twitter and Facebook to get consumers to spend at locally owned stores in cities around the world in so-called Cash Mobs.

At the first International Cash Mob day on Saturday, wallet- toting activists gathered in as many as 200 mobs in the United States and Europe, with the aim of spending at least $20 a piece in locally owned businesses, according to the concept's founder, Cleveland lawyer Andrew Samtoy...

...he only has three rules or goals as he explains them: "You have to spend at least $20, meet three people you never met before and have fun."

Dane County, home of the Wisconsin Uprising, has once-a-month Cash Mobs. Here's their Facebook page. We understand they've been organized in 32 states and in Canada. They even have their own rules, such as,