Our brothers and sisters in Mobile, Ala., were forced to strike after the company backed out of a negotiated contract with the Teamsters.

No one wants to strike, but the members of Local 991 had no choice. Jim Gookins, the local's secretary-treasurer, said:


These workers put their bodies in harm’s way every day to protect the public health. The least Republic can do is provide affordable health coverage for them. 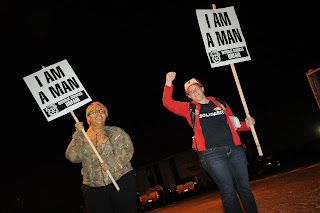 At the same time, a sympathy picket line went up at the Republic facility in Columbus, Ohio. The 78 Republic drivers and mechanics in Columbus, members of Teamsters Local 284, honored that line too.

Makes you proud to be a Teamster, don't it?

Republic is an immensely profitable company that intimidates, harasses and bullies its employees. Meanwhile, the company hauled in nearly $600 million last year, 15 percent higher than 2010.

Republic is demanding concessions in Columbus and Buffalo. In Kansas City, Republic tried to strip employees of some of their overtime pay. In Canton, Ohio, Republic tried to bully workers into giving up their union health care plan.

All across the country, many of Republic's 9,000 Teamster employees are wearing stickers that say, “Republic Services: Don’t Trash Our Contracts.”
Posted by Teamster Power at 11:36 AM