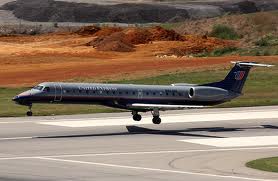 NH Labor News invited us to repost this item, and we are taking NHLN up on it:

For pilots, flying can be a great career choice. Big airlines seem tempting with perks like international trips, retirement plans, five day on / seven days off, and pay that could exceed $250,000. For most pilots, these luxury flying jobs are becoming harder and harder to get. Most of the pilots flying today are flying smaller commuter jets, and for smaller commuter airlines. Commuter airlines used to be the place where newer pilots would work to gain hours and experience before being hired for a "major" airline.

As the aviation industry grew and fuel costs get higher and higher, airlines have been forced to cut back. They have raised the prices of tickets and cut the wages of pilots. According to AvScholars.com the average commuter airline pilot makes between $16,000 and $60,000 per year. That may seem like a good number but what they are not telling you is that starting pay is $16,000 and their top pay is $60,000. For Republic Airlines the starting salary for a co-pilot (entry level) is $35,000. This does not seem like adequate pay for someone who is handling the lives of millions of people a year. The life of a commuter pilot is no picnic. They work 10-14 hours per day, and fly around 23 days a month. This means they get 7 full days off in a month, that is if you live at the home base of the airline. If you have to commute to your airlines hub airport to start your work week, you may loose one of your days off.

Pilots have long known the power of organizing and being members of unions. Most of the major airlines are represented by the Airline Pilots Association (ALPA). Recently the Teamsters have been working to organize some of the commuter airlines. Indianapolis based Republic Airlines (RAH) is one of the largest commuter airlines in the market. For the last five years RAH Pilots have been working without a contract. It has become so bad with RAH and the Teamsters that Local 357 members have already voted to strike. They have been in heated contract negotiations since 2007.

Now RAH is attempting to sue the Teamsters for their website RAHcontractNow.org. Why would you ask? Because it is causing problems with RAH hiring new pilots. “As a result of these inaccurate statements,” the airlines said, “Republic has had an increase in the number of pilots who have not called back for interviews and dropped out of the application process (1).” RAH is working to quickly hire enough pilots to continue operations if and when the union goes on strike. The Teamsters are just telling the prospective applicants what it is really like working for RAH.


Incredibly long upgrade time. Currently 5 years. For a pilots hired today, they need the fleet to double, or for roughly 800 current First Officers to upgrade before they could upgrade.

It is not uncommon to have a few flights of your schedule canceled. Flights cancel, that's life. But at RAH, you don't get paid for them unless the company finds something else for you to do. For many of our pilots, this could constitute a 20% pay cut any given month. Cancellations strike without regard to seniority, paycheck, or previous cancellations.

RAH displaced an entire base of pilots from HNL (yes, Honolulu) to LGA (yes, New York City). How much time were the pilots given to make the move, you ask? 3 weeks. 3 weeks to cancel their leases and relocate their lives 5,000 miles away.

As you can see these are merely statements of facts from the people who are actually working for the airline, not people paid to promote the airline. These points are also very important to potential pilots. Remember how I said that RAH starts pilots out at $35,000 per year. Without any contract, the pilots have not received any raises in over four years, and the average "upgrade time" is five years. That means if you take this job, it will be five years or more before you will move from co-pilot to captain, and you will make $35,000 max. That is if you fly all of the flights they have planned for you. Lets hope they do not cancel any of your flights, because if your not flying their not paying.

Good pilots are hard to find. Republic Airlines should be respecting their pilots and working with the Teamsters to create a collective bargaining agreement. They should not be trying to hire a secondary workforce so they can fire all the union workers when they go on strike. These corporate tactics should not be allowed and public needs to be aware of these actions as well. I applaud the Teamsters for speaking the truth and working to spread the word about the horrible treatment of Republic Airlines employees. I went to college with many pilots who now work for Republic Airlines. To them I say, Stay Strong!