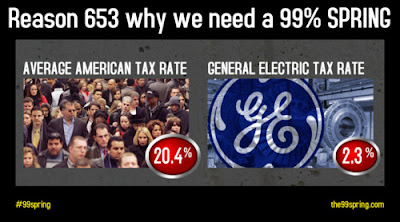 The 99 Spring may eclipse Occupy Wall Street in capturing the world's attention. The upcoming trainings, from April 9-16, are aimed at preparing for two months of protests, sit-ins, rallies, marches against the power and greed of the 1%.

Here are some details:


Our movement will be holding huge rallies in every major city on Tax Day to call out the 1% who refuse to pay their fair share. We'll be gathering massive crowds to confront CEOs and top executives at annual shareholder meetings of Wall Street banks, dirty energy polluters, and corporations that refuse to treat workers fairly. And we'll be doing everything we can to call out the corrupting influence of corporate money on our elections.

Wondering what the trainings are all about? In other words, are you worried that they're some un-Teamsterlike drum circles or Kumbaya kind of thing?

Here's a description by someone who attended a training in New York:


I met community organizers, peace activists, union members, occupiers, and many more. The group was inter-generational, racially diverse, gender balanced, and included folks from all NYC boroughs, Long Island, CT, NJ, and upstate. My impression is that most are experienced organizers, but from many different traditions and organizational homes.

The curriculum had three parts:

The first is your basic Marshall Ganz story of self/us. This is training delivered for years now at countless political and organizational homes, including my old synagogue. For those who don’t know, Ganz started his career at the United Farm Workers, working with Cesar Chavez.

The second is your basic nonviolent direct action training, with roots in Gene Sharp, Training for Change, and the Direct Action Group that emerged post-Seattle in the anti-globalization movement. It wasn’t out of step with anything that say, Starhawk or Lisa Fithian or the Ruckus society would have done.

The third part was the story of the 1% vs. the 99%. It’s basic training in understanding the economic crisis and our collective crisis as a country. This is more or less the kind of training being used by unions and community organizing groups around the country for the last 2-3 years.

There was zero, none, nada discussion of the Obama campaign, electoral politics, the Democratic Party, or MoveOn.

And then there's this:


The overall strategy seems to be similar or based on what Stephen Lerner (formerly of SEIU) was articulating in a series of talks about “creating a crisis for the rich.” In a nutshell, it proposes mass direct action aimed broadly at the 1% in order to force them to make concessions.

When we talk about ‘demands’ or ‘goals’ there are laundry lists galore. Winning strikes, raising taxes, winning elections, targeting specific corporations, etc. But behind all those disparate goals lies a framework: increasing the share of wealth that flows to the 99% and reducing the portion controlled by the 1%. That’s the prize. And large parts of the power structure (i.e., Democrats and even some corporations) think it’s a good thing too.

Find a local training by clicking on the link below. (If you live in Kentucky or Southern Indiana, we can tell you right off that Local 89 is hosting a training on April 15.)