How to rise up and join The 99% Spring 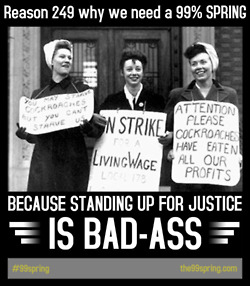 In two weeks, hundreds of union halls, churches and living rooms will host trainings for the massive mobilization dubbed The 99% Spring. Organizers are well on their way to training 100,000 people for non-violent direct action against the status quo between April 9-15.

Teamsters are on board with the movement; many have already gotten emails telling them how to find a training near them.

Jake Olzen, writing for Alternet, explained the 99% Spring is intended to inspire existing organizations to incorporate direct action into what they're already doing -- and to capture some of the Occupy spirit:

...this massive and controversial effort is coming from ... a diverse coalition of labor unions, environmental and economic justice groups, community organizations and trainers’ alliances.

...Earlier this month, more than 70 people participated in a two-day national training in preparation for the upcoming regional trainings. The hope is that more than 1,100 trainers will be equipped to organize local trainings in their communities during the week of April 9–15, when more than 700 trainings around the country have already been scheduled.

Each training will have its own local flavor, depending on who the trainers are and where it is located, but a common curriculum ties The 99% Spring together. In an email sent from SEIU Vice President Steve Thorton to potential trainers, he broke down what to expect at each event: storytelling; teach-ins on economics; community-building skills; goals, strategies and tactics to mount campaigns; and, of course, techniques of nonviolent direct action.

Click here if you're ready to rise up and change the direction of this country: