If corporations are people, why don't they pay taxes? 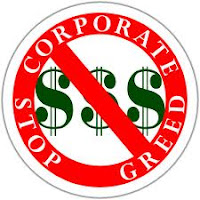 Here's another question: When did freeloading become an American value?

Right-to-work-for-less proposals that popped up across the country this January would let workers benefit from union representation without paying for it. And corporations have become obsessed with avoiding the taxes that pay for their educated work force, the infrastructure with which they move their goods to market and the firefighters and police officer who protect their assets, to name just a few.

We already know that 37 multinationals didn't pay a penny in taxes last year.
Alternet points out that a whole bunch of smaller companies don't either:


The percentage of U.S. corporations structured as “nontaxable businesses” soared from about 24 percent in 1986 to about 69 percent as of 2008, according to the Internal Revenue Service. If you include partnerships and sole proprietors, the number gets even bigger.

And there’s more: Up to 60 percent of all U.S. businesses with profits of $1 million are structured as pass-throughs. In the Wall Street Journal, John D. McKinnon points out that their enormous popularity is “one big reason why federal corporate tax collections amounted to just 1.3% of GDP in 2010, well below their mark of 2.7% in 2006 and far beneath their peak of 6.1% in 1952.”

You can buy a Stop Corporate Greed button here. Then wear it to your nearest protest.
Posted by Teamster Power at 12:59 PM