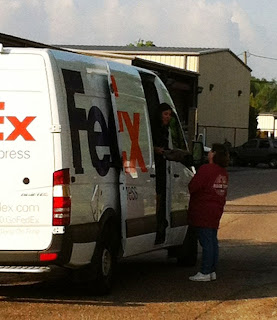 (UPDATES to correct typo in last graf, spotted by @trkrsvoice)

We're hoping to hear some good news soon from our brothers and sisters at Republic Services. In the meantime, we again praise the remarkable solidarity of 400 Teamsters in New York, Ohio and Washington. They refused to cross the picket line, giving up their pay, to help out their 24 brothers in Mobile.

Alternet had a story about the spreading sympathy strike. The reporter interviewed Alabama striker Robert Agee.


“It means a whole lot to know that other guys stand behind us…” says Alabama striker Robert Agee. “To have that much support from people you don’t even know means a whole lot.” That solidarity – from South to Northeast to Midwest to Northwest – may be what brought Republic back to the negotiating table for the first time in months.

The photo above shows a FedEx driver refusing to cross the Republic picket line in Mobile. That should lift all our spirits. The company had to send a representative out to sign for the packages. We hope that was a very long walk.
Posted by Teamster Power at 3:32 PM