It's a Day of Action Against Bank of America

The poor widdle Banksters of America are already having a rough day, we're afraid. The Ides of March dawned with the peerless Matt Taibbi's must-read story in Rolling Stone, "Bank of America: Too Crooked To Fail." Here's a gem from the maestro:


The ultimate Too Big to Fail bank really is America, a hypergluttonous ward of the state whose limitless fraud and criminal conspiracies we'll all be paying for until the end of time. Did you hear about the plot to rig global interest rates? The $137 million fine for bilking needy schools and cities? The ingenious plan to suck multiple fees out of the unemployment checks of jobless workers? Take your eyes off them for 10 seconds and guaranteed, they'll be into some shit again: This bank is like the world's worst-behaved teenager, taking your car and running over kittens and fire hydrants on the way to Vegas for the weekend, maxing out your credit cards in the three days you spend at your aunt's funeral. They're out of control, yet they'll never do time or go out of business, because the government remains creepily committed to their survival, like overindulgent parents who refuse to believe their 40-year-old live-at-home son could possibly be responsible for those dead hookers in the backyard.

To add to the banksters' discomfort, it's "F the Banks Day," "F" meaning foreclose. In 12 cities, protesters will be moving their living rooms into Bank of America lobbies, the way these guys did earlier this week in New York (Watch here).

The point of the exercise is to demonstrate how Bank of America illegally took tens -- hundreds? -- of thousands of homes through illegal foreclosures. Follow the action on #FightBAC.

Today is also the day that Bank of America's disgruntled customers will move their money to another bank. In Phoenix, for example, number nine dream will move his checking account from BofA after waiting a long time for the right day to do it. He explains that Bank of America took homes from four people in his neighborhood, slapped fees on his grandchildren's savings accounts and put hidden fees on loans to veterans.

A new logo for the bank has even been devised: 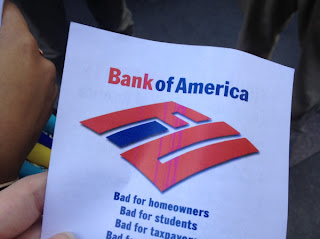 We'll be keeping track as the day unfolds.
Posted by Teamster Power at 9:45 AM