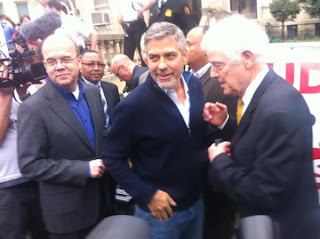 Our union brother George Clooney was arrested by our union brother police officers in front of the Sudanese Embassy in Washington today. Clooney, a member of the Screen Actors Guild, said he was just trying to draw attention to the rape and starvation of children in Africa. The Guardian, a unionized newspaper, reports,


He has called on US officials to pressure the Chinese government to push the government of Sudan to open the southern region of the country to relief efforts. As the rainy season approaches, large numbers of the region's inhabitants could face starvation.

In California, members of the Napa City Firefighters Association battled a house fire that ignited gunpowder and ammunition, according to KTVU.

The New York Daily News reports Jeremy Lin, a member of the NBA Players Association, will remain in the starting line-up. NFL Players Association stalwart Peyton Manning will work out with the Denver Broncos today, according to the Denver Post. And in baseball news, ESPN reports the Chicago Cubs will send minor league pitcher Aaron Kurcz to the Boston Red Sox. If all goes well for the young player, he'll make it to the major leagues and be able to become a union thug by joining the Major League Baseball Players Association.

In business news, the union thugs who run the airlines posted their best January on-time performance on record, according to the Associated Press. They're members of a number of unions, including the Teamsters, the Air Line Pilots Association and CWA.

You get the picture.
Posted by Teamster Power at 4:52 PM