Georgia's working families are rising up by the thousands today against the Legislature's un-American attack on workers, SB469. Calling themselves "We Are Georgia," they descended on the Capitol, filling four full Atlanta blocks.  At one point, 500 at a time rolled up chanting "Kill the Bill." 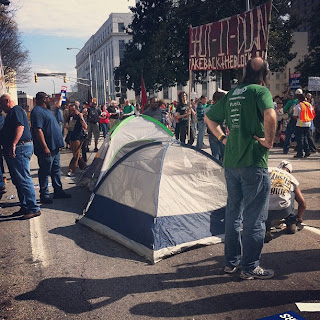 The message is simple: Elected representatives should be working on job creation instead of attacking their own constituents. SB469 is so bad you can't believe it's happening in America. The bill would let the government interfere with a worker's choice to join a union, and it would criminalize picketing. Incredibly, it passed the Georgia Senate and will be considered by the House next week.

Teamsters met up with their union brothers at 11 a.m. in front of the IBEW building and marched together toward the Capitol.  @D0rK_F4ce tweeted:


Helicopter overhead, hundreds in front of the capitol, beautiful day to fights for your rights! #wearega

Civil rights hero Rep. John Lewis rallied the crowd. Another congressman was there too, but we haven't figured out who yet. Nonetheless, @stacyhopkinsga tweeted (aptly):


Tip 'o the hat 2 the GA Dems who attended today's rally; we need 2 see 2 hear from those fighting for us so we can have YOUR back! #weareGA

If you couldn't attend the rally, try to show up at the SB469 hearing at 3 pm in the Capitol. Or click here and do what the instructions say! Or follow @jennaudrey's advice: 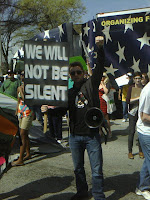 Keep updated on how to stand w #weareGA and fight extreme bills like #sb469: text GEORGIA to 235246

Big props to our brothers and sisters at Local 728 in Atlanta. They've been leading the fight against this attempt to take away our Constitutional rights.
Posted by Teamster Power at 2:11 PM