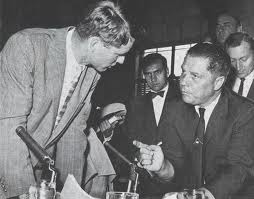 It took Sotheby's lockout of 42 Teamsters to bring together the sons of Jimmy Hoffa and Bobby Kennedy after 40 years of chill between the families.


I know that our families have been at odds in the past. But you and I have spent our lifetimes fighting off the right wing attacks on the union movement and battling to making our country live up to her historical ideal as a template for justice and democracy. Our success will require a large and durable middle class that can only come from a strong union movement.

Dave Shepardson at the Detroit News had the story this afternoon. He writes,


The Hoffa and Kennedy families appear to be patching up relations nearly four decades after a well-publicized fight, and they are doing it through the handling of a labor conflict.
As U.S. attorney general, Robert F. Kennedy targeted then-Teamsters President James R. Hoffa for prosecution...

Kenney had planned an auction at Sotheby's to raise money for his environmental group, the Waterkeeper Alliance. Then he learned about the auction house's 7-month lockout of its art handlers from Teamsters Local 814. So he pulled the auction from Sotheby's and wrote the letter to Hoffa.


The problems facing working families are far more serious than our fathers' past conflicts. Robert F. Kennedy Jr.'s decision to stand up for the locked-out Teamsters at Sotheby's tells me what a good man he is.