Goodish news from NH: RTW4less passes, but not by a veto-proof margin 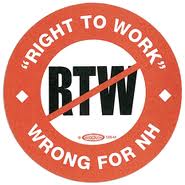 Call it a muted victory. The New Hampshire House of Representatives today voted to approve right to work for less (we also like the designation "right to freeload"). It will likely pass the state Senate. Then Gov. John Lynch will veto it. Then the House won't have enough votes to override his veto.

Then in November, Granite Staters will flock to the polls and vote out all those anti-worker lawmakers who care nothing about creating jobs while attacking the middle class. (We can dream, can't we?)


After the New Hampshire House failed to get enough votes to pass a repeat of right-to-work by veto-proof margins, New Hampshire’s labor leaders lambasted Speaker O’Brien for pushing an extreme, unnecessary right-wing agenda over the real needs of Granite Staters for the second year in a row. The vote count (198-139) was essentially unchanged from last year.

A little too close for comfort.
Posted by Teamster Power at 1:29 PM