"Non-profit" doesn't mean "non-greedy," which is why workers at the American Red Cross in Lansing were forced to strike today. About 150 workers represented by the Teamsters and the Office and Professional Employees International Union had to walk out over cuts in health care benefits and dangerous understaffing. They join 400 striking Red Cross workers in Ohio.

The Red Cross rakes in $2 billion a year from blood donations, and yet it wants to take away workers' restroom and fatigue breaks. Workers fear their exhaustion could lead to mistakes and endanger the blood supply. Red Cross has already racked up more than $40 million in fines from the Food and Drug Administration. 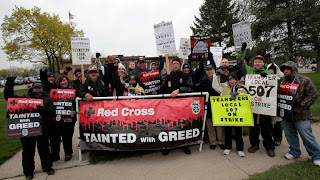 
Red Cross employees have made every attempt to settle outstanding contract issues. They love the work they do, but long shifts with short staff and high pressure, combined with management’s insistence on replacing their quality health insurance with a far inferior one, has left them no other choice.

Earlier this week, 150 Red Cross workers who are members of the United Food and Commercial Workers Union (UFCW) walked off the job in Toledo, Ohio. They joined 250 Teamsters who were forced to strike in Cleveland on February 14.

Lansing Red Cross Teamsters have been without a contract for nearly 3 years. Jennifer Hemstreet has been a mobile unit assistant for blood drives in Lansing for 19 years. She said,


I want Red Cross to bargain in good faith over our health care. Blood donors provide their own blood for free and Red Cross turns around and sells it for $250 or more a pint. They say it’s to pay my salary, but it doesn’t add up. The CEO of Red Cross makes more than $1 million a year.

Michael Parker, secretary-treasurer of Local 580 in Lansing, pledges to fight Red Cross for the right to bargain over health care:


They are cutting the health benefits of their employees around Ohio, Michigan and everywhere else ... the big shots in Washington are feasting over workers’ sacrifices. If you ask me, the Red Cross is infected with greed.

View photos of these brave workers here.
Posted by Teamster Power at 2:20 PM