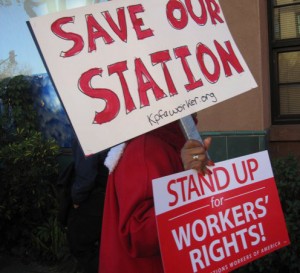 We don't think so, but sometimes we do worry. David Macaray in a recent Huffington Post pointed out something we all basically knew -- that a lot of limousine liberals don't exactly like labor unions. They won't come out and say it, most of the time, but you know they don't.


While the Democrats have thrown a few crumbs its way, and academics have eloquently given voice to the Movement, and even non-union workers have grudgingly recognized organized labor's historical contributions, when it comes to the down-and-dirty battles necessary to get the job done, working people realize that no one can be relied upon except other working people, and the unions that represent them.

A character actor I know, a long-time SAG member, once told me: "Scratch a Hollywood liberal, and you'll find a union hater." Granted, it was a broad generalization, but having swum in the Hollywood tank for more than 30 years, he was convinced that the majority of those affluent, progressive-minded denizens of Malibu and the West Side (often stereotyped as "knee-jerk liberals") not only don't respect or admire organized labor, they actually root for it to fail.


Last week, the union representing KPFA’s workers, Communications Workers of America Local 9415, became aware of Jackson Lewis’ hire by Pacifica at all five stations in the network – KPFA in the San Francisco Bay Area, KPFK in Los Angeles, KPFT in Houston, WPFW in Washington D.C., and WBAI in New York. At a meeting of KPFA’s bargaining unit, the station’s union workers voted to demand that the Pacifica National Board immediately terminate its arrangement with Jackson Lewis, and sent a letter to all members of Pacifica’s board to that effect. The board met Wednesday, March 7, but chose not to take action to reverse its employment of the union-buster.


We see the entry of Jackson Lewis as a declaration of war on the unions that represent Pacifica workers. We fear it will lead to unnecessary legal expenses the network can ill afford, sour Pacifica’s already dismal relationship with its union workers, and alienate many listener-supporters who do not want their donations to be handed over to one of organized labor’s greatest enemies in the United States.

Here's how the Pacifica Foundation self-righteously describes its mission:


...to engage in any activity that shall contribute to a lasting understanding between nations and between the individuals of all nations, races, creeds and colors; to gather and disseminate information on the causes of conflict between any and all of such groups; and through any and all means compatible with the purposes of this corporation to promote the study of political and economic problems and of the causes of religious, philosophical and racial antagonisms.

Sign a petition here to tell KPFA to call off its union busters.
Posted by Teamster Power at 3:12 PM