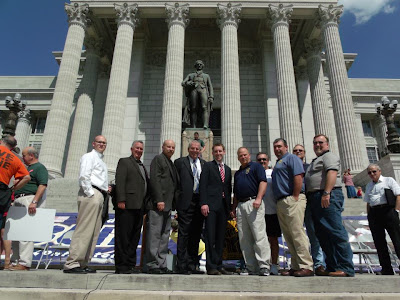 Of all the battleground states, Missouri often gets overlooked. It's not that the attacks on working families are more spectacular in Florida, Wisconsin, Ohio or Indiana. It's that Missouri workers have a good friend in Gov. Jay Nixon, and he's been able to veto some of the worst anti-worker legislation.

Missouri Teamsters are in the midst of the fight against heinous proposals such as right-to-work-for-less and limits on wages for public works projects. Yesterday, they joined thousands at a massive rally in Jefferson City. KMOX reports:


Thousands of people from labor unions and religious advocacy groups convened at the Missouri Capitol Tuesday, clogging up the hallways and filling up the front lawn.

Hundreds of these protesters came to the Capitol as part of a protest from union members on legislation that would alter the workplace and affect workers. Many of the union members and speakers said provisions limiting wages for public works projects and dealing with right-to-work were anti-worker and an attack against the middle class.


Teamsters Local 618 staff and other Joint Council 13 Teamster offcers and members at the State Capitol fighting for our Teamster members rights yesterday . In center is State Rep. Tim Meadows and Missouri Secretary of State candidate Jason Kander. Jason is currrently a State Rep. in the 44 Dist.

(Tim Meadows, of course, is vice president of Local 600 in St. Louis.)

The We Are Missouri Facebook page posted some terrific photos of the rally, like the one at the left.


Massive rally at the Missouri State Capitol. Gov. Nixon and Rep. Jacob Hummel burned up the crowd as Union members stood shoulder to shoulder for working families all over the state! Solidarity!

Posted by Teamster Power at 5:02 PM