Protect us from the madness of our elections 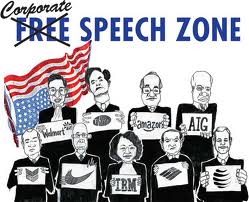 Anyone notice that corporations and billionaires now have even more power at the ballot box than they used to? And that seniors, veterans, students and minorities have even less? Citizens United and the voter suppression laws passed in eight states are part of a national conspiracy to disenfranchise the 99 percent.

The U.S. Supreme Court decided two years ago that corporations are people and have unlimited rights to free speech -- in other words, they can spend as much money as they damn please to buy dominate elections.

Lisa Rosenberg at the Sunlight Foundation observes that the decision also enables foreign corporations to influence our elections.


...By lifting the prohibitions on corporations' ability to make direct expenditures influencing federal elections, Citizens United allows 501(c)(4) nonprofits to fund independent expenditures and electioneering communications without disclosing where the money came from. ... It's ironic that while allowing for the very real possibility of foreign money to secretly infect our elections, the Supreme Court recently affirmed that foreign nationals are prohibited from making contributions or expenditures in connection with U.S. elections.

Vermonters, bless them, aren't too keen on Citizens United. In 52 Vermont towns, citizens will soon vote during their Town Meetings to on a Constiutional amendment declaring that corporations are not people.

That makes us feel a little better.

Until we consider the eight states that passed laws to prevent people from voting by severely restricting the kind of ID they can use to establish their identity at the polling place.

This year, the eight states that passed voter suppression laws are Texas, Alabama, Kansas, South Carolina, Tennessee, Wisconsin, Rhode Island and Mississippi. Fortunately, courts struck down the ones in Texas and Wisconsin. But Virginia and Pennsylvania are expected to follow soon with their own voter suppression laws.

We have lots of work to do, brothers and sisters.
Posted by Teamster Power at 12:46 PM