This Tea Party is about bilking activists 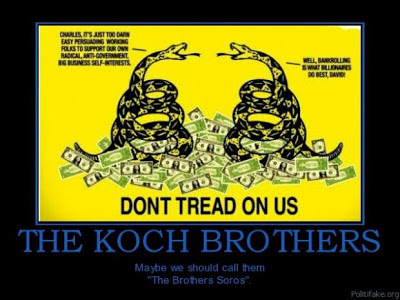 The FreedomWorks tea party group says it's about freedom. It's really about fleecing donors.

That's according to Dick Armey, who should know. He's formerly head of FreedomWorks -- and former Majority Leader of the U.S. House of Representatives.


FreedomWorks, which is funded primarily by very rich people, solicits donations from non-rich conservative people. More than 80,000 people donated money to FreedomWorks in 2012, and it seems likely that only a small minority of those people were hedge fund millionaires. And what are people who donate to this grass-roots conservative organization funded mostly by a few very rich people getting for their hard-earned money? In addition to paying Dick Armey $400,000 a year for 20 years to stay away, FreedomWorks also apparently spent more than a million dollars paying Glenn Beck and Rush Limbaugh to say nice things about FreedomWorks, in order to convince listeners to send FreedomWorks money that FreedomWorks would then give to Limbaugh and Beck. It’s a pretty simple con.

Pareene notes that at least Armey has the decency to be embarrassed by it. Armey told Media Matters,


...it makes raising money an end on to itself not an instrumental activity to support the foundation work that our organization does.

Armey is not happy that he's been ousted by Matt Kibbe, who's been trying to profit personally from a book written with FreedomWorks resources. And Armey at least had the decency to be angry about that. He told Mother Jones,


As a nonprofit, he says, FreedomWorks cannot be used to provide a private benefit to one of its officials; doing so could threaten its nonprofit tax status. "If they lose their tax-free status, you put them out of business," Armey says.

FreedomWorks is an offshoot of the Benedict Arnold Koch brothers' Club for Growth. So is another tea party group, David Koch's Americans for Prosperity.

When you lie down with dogs...
Posted by Teamster Power at 12:19 PM