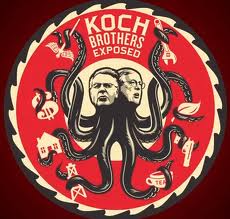 And believe it or not, they did it through nonprofit "charitable" foundations.

And, of course, they give money to ALEC, the dating service for state lawmakers, corporations and big political donors. CPI reports:

Little is publicly known about the precise sources of its funding. Americans for Prosperity and its foundation reported combined revenue of nearly $39.6 million in 2010, according to the groups' tax returns. David Koch is the foundation's president.

Here are some of the other foundations that benefited from Charles Koch's largesse:

Here are the four Koch Foundations that give the bulk of the Koch donations. Click on the link to see their IRS tax filings for 2011:

Posted by Teamster Power at 3:08 PM