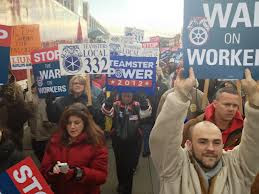 A lawsuit was filed today to strike down Michigans No Rights At Work law by the Teamsters, other Change to Win unions, the UAW, the Michigan Education Association, the ACLU and others.  The coalition charged the bills were enacted illegally because the public was locked out of the Capitol during debate.

The ACLU tells us the coalition argued the law:


...was in violation of the Open Meetings Act, the First Amendment, and the Michigan Constitution. The case, filed on behalf of a journalist, citizens, legislators, and unions, charges that government officials, in an unprecedented assault on democracy, deprived the public of their right to participate in the legislative process.

The lawsuit doesn't challenge the substance of the No Rights At Work law, but with the illegal and undemocratic process used to enact it. Further legal actions will probably try to strike down the law on its merits.

What the lawsuit does say is that the doors of the Michigan Capitol were locked for more than four hours on Dec. 6 while the bills were being debated on the House and Senate floors.

According to the ACLU:


While individuals already in the Capitol could stay, people waiting outside were not allowed to enter. In addition, the galleries overlooking the House floor were intentionally packed with legislative staffers so that the public would not be allowed in...

According to the lawsuit, the lockout at the Capitol merely added to the legislators’ attempts to swiftly pass these bills with little public input. The bills were abruptly introduced during the last days of the lame-duck legislative session, already a period of diminished public accountability. Rather than allowing the bills to go through the standard committee hearing process where the public would have been invited to comment, the right-to-work language was introduced for the first time on the House and Senate floors on the same day the bills were passed.

As further evidence of the desire to prevent the public from holding their government accountable, the lawsuit also notes the appropriations provision that was added to make the legislation referendum-proof under the Michigan Constitution.

The lawsuit can be read here. It was first filed on Dec. 6 to reopen the Capitol doors. Today, attorneys filed an amended complaint before Ingham County Judge William E. Collette asking him to strike down the law.
Posted by Teamster Power at 11:38 AM