Minimum wage on ballot in NJ after Christie veto? 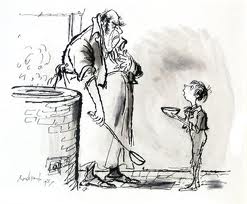 New Jersey Democrats are vowing to put a minimum wage increase on the ballot since Gov. Chris Christie's veto of the popular measure. Christie took a page out of Dickens and vetoed a $1.25 raise for the poorest paid workers in the Garden State.

(If you can't quite place Chris Christie, he's the guy who once urged reporters to "take a bat" to a 76-year-old widow -- and then called teacher's unions "political thugs.")


A Quinnipiac poll released last week found 82 percent of New Jersey voters support the wage hike, though the poll questions did not mention the Democrats’ proposal to tie future increases to the CPI index.

The minimum wage hike would have given a raise to 537,000 New Jersey workers, according to New Jersey Policy Perspective. Of those, 307,000 New Jerseyans making between $7.25 and $8.50 per hour would get an immediate raise. The rest would make a higher hourly wage as increases were scaled in later.

NJPP argues the resulting $439 million wage increase would spur commerce by $278 million in the first year -- and create 2,420 new jobs.


They plan to place an amendment to the state constitution on the November ballot that would boost the minimum wage and tie future increases to the consumer price index.

“The governor has essentially told working-class families that they’re on their own,” Assembly Majority Leader Lou Greenwald, D-6th of Voorhees, said Monday. “Our only recourse now is to present voters with a constitutional amendment and hope they will have more compassion for their neighbors than this governor.”

“We gave the governor a chance to do the right thing for working people in New Jersey. His action shows that he believes politics and politicians need to remain part of the process on minimum wage. I think they need to be removed from it entirely,” said Sweeney, who announced Monday he would not run for governor.

Keep in mind that one-third of poor American adults are working but don't earn enough to support themselves and their families. One-fourth of jobs in America pay below the federal poverty line for a family of four ($23,050).