Reads around the Internets 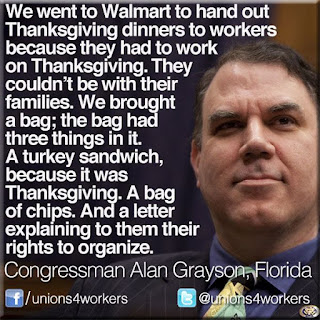 You can't always count on the mainstream media to cover news that's important to working people. So on Mondays we're sharing places on the Internets where you can find out what you need -- or want -- to know.

The Teamsters for Tomorrow Indiana Facebook page is just getting started. Please support it with a "Like."

Working Class Heroes has a terrific Facebook page here that features labor history. Today, for example, we learn that Jan. 14, 1874, the Sovereigns of Industry were organized in Philadelphia. And on Jan. 14, 1868, 85 delegates from 41 locals held the third convention of the National Bricklayers Union in New York City to organize for the eight-hour workday.

Every month, a journalism award is given to reporters who write investigative stories that promote social justice. It's called The Sidney, and it's sponsored by the Sidney Hillman Foundation, which was founded as a memorial to the president of the Amalgamated Clothing Workers of America. This month's Sidney goes to Leslie Patton, a Bloomberg News reporter.

The Hillman Foundation tells us:


Leslie Patton of Bloomberg News won the January Sidney Award for a "tale of two McDonald's"--a profile of the fast food giant as seen by its CEO and a fry cook.

This "Tale of Two McDonald’s" shows how the explosive growth of fast food has generated fat profits for executives and shareholders but left workers behind.

After 20 years on the job, Tyree Johnson earns just $8.25 an hour as a fry cook, minimum wage in Illinois. Johnson is lucky to scrape together 40 hours a week because neither of the two McDonald’s he works for will give him full-time hours. Johnson would have to work over a million hours to earn as much as the company’s last CEO, who took home $8.75 million last year.

Johnson lives in a single room occupancy hotel with a shared bathroom. He is forced to wash in a McDonald’s restroom at the end of one shift so he can head to a second shift at another McDonald’s located about a mile away.

"I hate when my boss tells me she won’t give me a raise because she can smell me," he said.