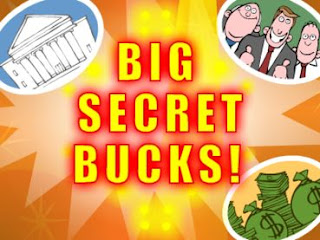 It's bad enough that America's 2012 election was purchased by big corporations and billionaires, but it's even worse that we don't even know who they are.

We do know at least $300 million was spent on campaigns by dark money groups. Shockingly, that amount might be as low as 1 percent of the total.

It's essential to know who's funding these attacks. Working families in America and Canada are under constant attack by corporations and billionaires that want to lower our standard of living and endanger our health. One of their tactics is to divide working people through phony populist groups like FreedomWorks, which is actually funded by very rich people.

Dennis Pierce, a Teamster brother and president of the Brotherhood of Locomotive Engineers and Trainmen, points out,


The only way we will stop these attacks is to know exactly who the attackers are, what their motives are, and then understand just how hard they are working to turn Americans against unions. As I have said time and time again, labor unions did not cause the financial problems that our great nation faces, labor unions are what helped build the middle class that at its strongest, made our country the undisputed economic powerhouse in the world.

Here's how little we know: The U.S. PIRG Education Fund and Center for Media and Democracy released a report showing hundreds of millions of dollars were poured into the last election through “social welfare” non-profits that are really political vehicles and through shell corporations formed to hide a funder’s identity.

Dark money nonprofits and shell corporations make it impossible to identify violations of election or tax law, such as the infiltration of foreign funds.It's a good bet that some of the dark money that influences our elections comes from outside the country. It's a better bet that the shady donors want to lower wages, ease safety regulations, eliminate consumer protections and enhance corporate power.

The report, "Elections Confidential," reveals that contributions from phony for-profit corporations accounted for 17 percent of all business donations to Super PACs. Other key findings include:
Dark money nonprofits

Here's an example of how it works: The 501(c)(4) American Action Network (AAN) spent $11 million on ads attacking Democrats during the 2012 campaigns. The ads attacked candidates' personal ethics, their support for mining, their position on taxes.  Many were found to be misleading by nonpartisan fact-checkers.

But citizens didn't know that AETNA funneled $3 million to AAN -- until the insurance giant accidentally disclosed it in year-end findings. As the report points out,


AAN’s messages about a candidate’s support for single-payer healthcare, or its $1.2 million campaign in July urging Republicans to overturn the federal health care law, would surely be viewed by voters in a different light when provided with the knowledge that the ads may have been funded by the insurance and pharmaceutical industries. It (allows) them to influence elections and policy without having to publicly stand behind their message.

Here's another example: A non-profit called Montana Hunters and Anglers Action bought ads supporting a third-party candidate in the U.S. Senate race. An investigation by ProPublica found the group has ties to Democrats, which suggests the group really wanted to siphon votes from the Republican candidate.

Another 501(c)(4), the Center to Protect Patient Rights, has ties to the Koch brothers. Not much else is known about it, except that it gave money other dark money groups and to the American Future Fund, which spent at least $46 million attacking Democrats in 2010. 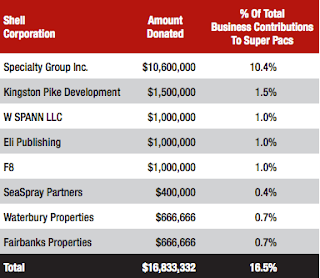 A shell corporation engages in little or no business activity. Sometimes they're legitimate, but sometimes they're used to evade taxes, launder money, illegally transfer foreign funds and finance terrorist groups.

The report also tells us,


“W SPANN LLC,” a group that made a million dollar contribution to the Pro-Romney Super PAC Restore Our Future. W SPANN LLC caused suspicion when the NBC reporter noticed that the corporation had formed, made the $1 million contribution, then disbanded all in the course of about three months.

U.S. PIRG and Center for Media and Democracy make several recommendations for reform. They suggest overturning the Citizens United Supreme Court decision, require publicly traded companies to disclose their political spending and change IRS rules so nonprofits can't be set up under the guise of "education" to influence elections.